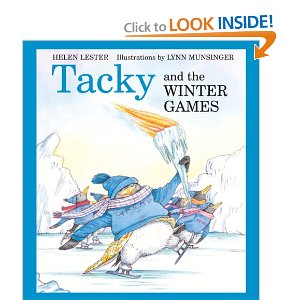 Penguins in training for the Olympics. Of course it has to be the winter Olympics! Add loads of wit. And we have an entertaining, educational and athletic package!

Some of us are probably familiar with Tacky – Tacky the penguin. And this one belongs to the same series of books. It begins with Tacky’s friends declaring The winter games are coming, we must must must be in shape to win win win.And that’s when the riot starts! The next few pages show fluffy creatures with sharp beaks jumping ropes in a row, lifting weights, and even doing sit-ups. But not Tacky. He is digging into his junk food and watching too much TV while his counterparts are loading up on ‘training meals’ and good sleep. Its soon time for the opening ceremony and the athletes walk in with their chests thrust out. The anthem is played (which by the way goes With our beaks held high and our bellies held low…) And the medals are on display – not bad, pretty good, big winner.

The first event is the bobsledless race and our team is called Team Nice Icy Land. Tacky carries the team on his belly and slides down to reach the finish line in record time only to hear the official say This is bobsledLESS race. The ski jumping event follows. Picture helmet-ed penguins with frozen fish skis, and that’s exactly what you will see. But Tacky, of course, is tumbling and crumbling – simply because his “skis” thawed when he was “warming up” near the fireplace right before the game. By now, we get the idea that Tacky is not helping his team win, at all, and his friends are annoyed with him. Is the riot over? Not as yet. In fact it peaks further down when Tacky actually swallows the baton during the relay race and ends up going under the x-ray machine!

Suspense mounts and smiles fade away. Not for us. But for the little ones, it is a nail-biting finish.
Lynn Munsinger’s illustrations are detailed, brimming with humor and intelligence, a combination that carries the story with ease. A light-hearted and yet glorious introduction to routines of official gaming events, training for games, the Olympics and particularly the winter Olympics. A gold winner shall I say?