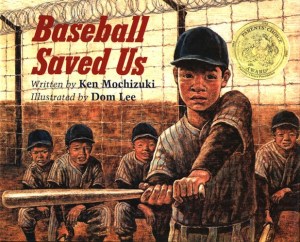 Baseball is an all American thing, the national sport and pastime. It is almost a cultural identity and its own epic is often burdened with American history in the background. Standing testimony to this is how a Japanese-American boy regains dignity and acceptance at the ballpark, post World War II. Written by Ken Mochizuki, whose parents were camp internees in Idaho during the world war, this book makes you cheer our little hero, while holding off that drop of tear that has already arrived.

The voice is that of a Japanese boy, an American citizen who is pulled out of school one day by his mother. His family is sent with many more Japanese families to live in barracks in an internment camp established in the desert, in the middle of nowhere in 40s USA. A soldier with a gun stands on a tall tower at the camp monitoring the group every second, every day. With no basic amenities and no work to do, kids and adults idle around. There is pent up anger, frustration and boredom. This is when the boyâs father takes the initiative to come up with a baseball diamond. Soon, with collective and creative efforts (and no interference from the guard) many games are being played on that field encompassed by barbed wire fences and armed watchdogs.

However, the boyâs track record at school, before camp, is not very impressive. Tarnished by experiences of name calling because of his smallish stature which was even more accentuated amidst American boys, he is diffident and shy at his game. He was Shorty back home. But now at camp, he does not feel different in the company of Japanese boys like him. With this feeling of normalcy and the motivation to impress the guard staring at his game all day, he buckles up and performs. Daily sessions then on hone his bat-ball skills.

The war is over and he is back at school. But he feels worse. The boys donât even talk to him now. This is when America had been at war with Japan, when the U.S Government seemed to suspect the loyalty of immigrants in the country and hate was running high. The Japâs no good, Shorty, Easy out, the boys scream at him, when it is his turn to bat at the ballpark in school. He stares at the pitcher and sees the guard on the tower in him. A dramatic finish to the game and to the book is the last page showing the American boys in the winning team lifting Shorty up with pride and joy. Baseball sure saved â helped his people survive the camp and helped him become a hero.

The illustrations are in sepia, in tones of brown and black reemphasizing the depressing mood in the desert. The author has also restricted some of the darker details to a few sprinkles, without going overboard about wartime camps. While it can be hard for some of us and our children to directly relate to those times, the issues are still part of what every âdifferentâ child experiences under varying circumstances today – it boils down to the battle to fit in and to feel accepted.

This book provoked questions about war in my six something year old. She could not fathom being uprooted and seemed very curious about ways in which normal life is disturbed when a country is at war. The story can also set the stage for sensitive and meaningful discussions about tolerance and oneness. It can also make children value the better times of today, that some of them enjoy. While critics might think that a home run might not be the answer to discrimination, it still works for a childâs understanding is my personal thinking. The deeper virtue might be courage; courage of the kind that the short Japanese boy who played Americaâs game amidst racist gibes had. This book inspires in more than one way.